In the morning it was still raining. I woke up at 7:30, but until 9.00 still waited at least a bit decrease. Again, I made spaghetti and I’m smart and clever dog, savored them with sugar that constantly carry and collect from cafes as a guide for my tourists. It is useful to carry some sugar with you. This time I was with low blood sugar. My luggage was in the saddlebags, bike in front of tent, but the rain did not diminish. It was 10:00 I got tired and left. Almost immediately reached in Vidrare. 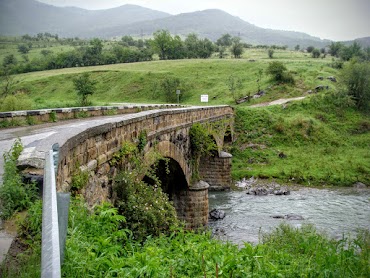 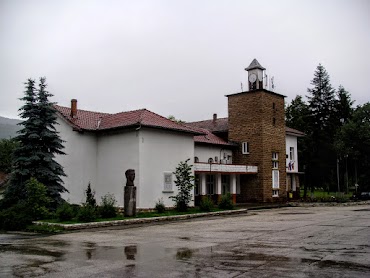 Road between Vidrare and Kalugerovo after fork to Manaselska reka on maps and even Google maps is a gravel. I thought it would be something like this road around Karash and Sredni rat, but it proved to it was just surface is concrete, not asphalt. 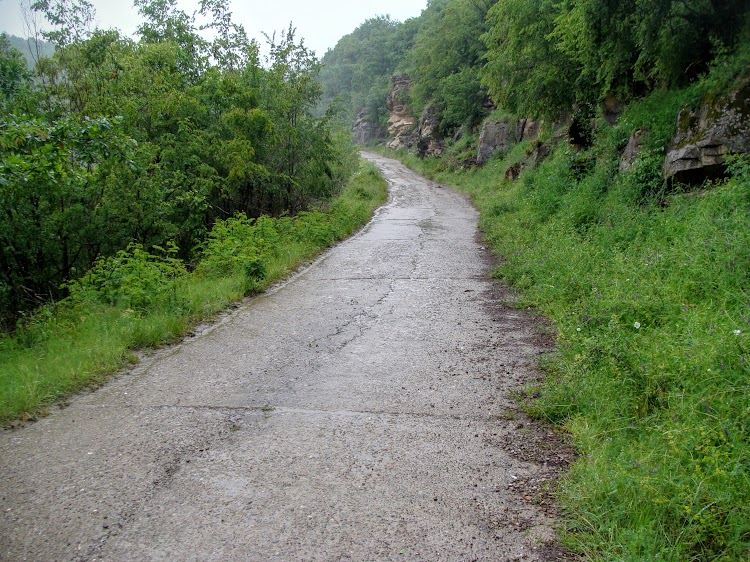 Since yesterday evening, more or less something creaked into back motion. I splash a lot of WD-40, but in a certain interval appeared less. An hour and a half after I left, suddenly bike slowed and then after turn-two, the rear tire just stopped. No movement forward or backward. I should at least be grateful that the rain stopped? Either I was sopping wet. I took the wheel and lightly developed bolts and without saddlebags try. He tightened again. I pulled axis, may lost some pellets from bearings, rearranged others, but again could not tightened without movement back to block. Finally with loose bolts, terrible clearance and even more terrible sound continued. 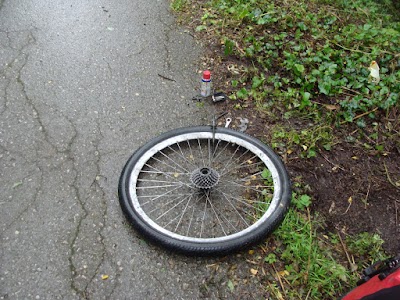 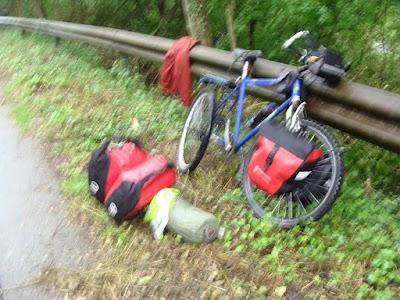 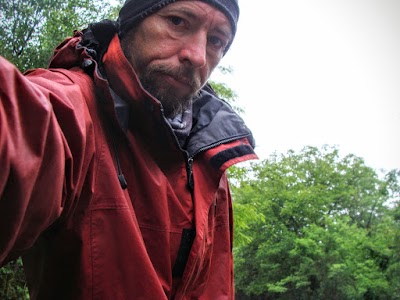 I turned out not so far from Kalugerovo. I was like a medieval curse – first the birds and the animals fled, people heard Infernal sound, mothers stuck in houses children, men nervously twirled mustache, and from the haze of wet asphalt appear me – heavily laden bike driven from a wet man with a particular evil look. Here is the moment to thank all the drivers stopped to help and understand why chase bearing pellets in the middle of a third-rate country road. Oh, but then no one. Passed for one hour of repair 5-6 cars, but apparently the place and what I do are the normal things in the world.
I sat down in Vidrare to think what to do. I can leave a bike at the shopkeeper in the center and with rim to get off to Pravets and Botevgrad to fixed. And then cycling a few more days. But my ultimate goal was Sofia with or without problem. And I headed to the nearest train station – Roman. But still they had over 25 kilometers. and it on the road with sections of gravel. Wheel stamping and grinding, and passed Karash and Hubavene. Already see the sign on the Roman, when the tire stood in a strange position and stopped again. On some meters away from town. Unfortunately railway station was at the other end and had to go through the whole town. Unhook brakes and pushing slowly and glorious crossed the whole town, crossing Iskar River to 12th and last time.

Previous articleAlong the river Vit. How not to fall in love with road 305?Next article Caves Academic and Pepelianka (Viper)