Food acute poisoning is possible when in the food are placed poor quality animal products /meat, fish, sausages, canned meat and fish, milk and dairy products/. Food poisoning /food toxic infections/ arises from the impact of micro-organisms and products of their metabolism /toxins/ on the human body. Food would be infected with improper storage and processing disorders. Particularly dangerous are minced meat and fish products. Food poisoning occurs suddenly as malaise, weight, vomiting, colic abdominal pain, diarrhea sometimes mixed with mucus and blood. Early sickness often associated with the adoption of poor quality food. In case of food toxic infections rapidly growing signs of intoxication of the body – speed and attenuation of the pulse, drop in blood pressure, paleness of skin, increased thirst, temperature rise to 38-40C. Such a patient is necessary as quickly as possible to assist due to the rapid development of acute cardiovascular weakness and danger of death. It is very important at the first symptoms that appear 2-4 hours after ingestion of contaminated food to start helping. In rare cases the disease can occur after 18-24 hours or later.

1. It should be called doctor and proceed to gastric lavage with warm water. In order to remove food residue from the stomach washing should continue until “pure water”. On several occasions the patient should be given plenty to /from 1.5 to 2 liters/ fluids and then induce vomiting, as the finger is irritating the root of the tongue. Abundant drinking fluids is necessary and in case of spontaneous vomiting;
2. After gastric lavage patient is placed on the bed, turns well and warm / warmer leg. Give him not a very strong tea or coffee;
3. Vomit and faeces are retained until the arrival of the doctor who looks around them and then if possible they should be disinfect by mixing with chlorine.
Botulism is a serious illness which refers to food toxic infections. It occurs through consumption of food contaminated by bacteria, releasing life-threatening toxins. Often such products are canned fish, meat, sausages, not subjected to adequate heat treatment. The disease manifests itself after 12-24 hours /sometimes later/ with headaches, dizziness and general weakness. Characteristically bloating, no diarrhea, urinary retention. Particular risk for this disease is that it affects the central nervous system / swallowing disorders, eye separation and myopia, the provision of upper eyelids, hoarseness. Further, the patient’s condition deteriorated progressively.
First Aid is virtually the same as other food toxic infections. The patient is transported in an emergency hospital. 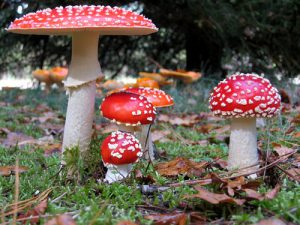 Intoxication with poisonous or edible, but rotten mushrooms are too frequent. Signs of poisoning appear about 1 to 3 hours after meals. Appear weight, general weakness, excessive salivation, vomiting followed by excruciating, severe colic, bloody diarrhea, headache, dizziness. In more severe poisonings occur and symptoms of injury to the central nervous system – visual disturbances, hallucinations, seizures. In the next stages of poisoning develop motor agitation, which, after 6-10 hours passed in drowsiness and apathy. Body is lowered into or below normal, sclera of eyes and skin turn yellow. If you do not have timely assistance too fast developing state of collapse and death occurs. Correctly and quickly rendered aid equipment can be crucial to the fate of the patient. If gastric lavage is recommended to use a slightly pink solution of potassium hipermanganat. Take rapidly transport the patient to a medical facility.