In the below map, you can see the Bulgarians as number of municipalities on the left and as a percentage of the population of the municipality the right. As still learning a Mapbox script could not score more than three functions and unfortunately the map was more gives an overview than informative nature. So I you can see a data table in a separate file. You may download shape file from this map after support project in Patreon

use the scroll wheel to zoom in and zoom out

What does this table as data and what can we analyze it?
Let’s look at countries:
Bulgarians in Bulgaria 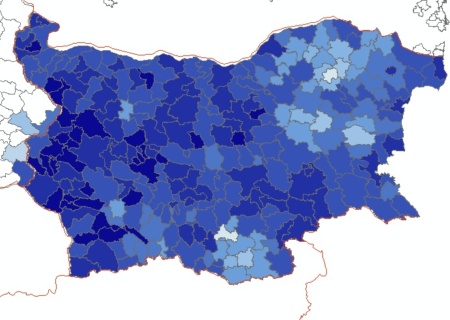 The data in the table I used column Ethnicity in Census 2011. That, however, revealed to me a mistake or the formulation of the question or in the methodology. According to the census in the country live 5,664,624 Bulgarians. But whether and how Bulgarian Muslims (Pomaks) identified themselves as such? You can see a map that shows the municipality Sarnitsa high, but that’s because I’ve added the Bulgarian-Mohammedans, but details lacking for self-determination, as the municipality has set up four years after the census, and data on villages’m not looking. In other areas of Bulgarian Muslims, the values are not as high, which causes a dilemma – whether to use data from the self-determination or add data discretion. Both are subjective in nature, in both is very thin border between statistics and misuse of statistics.
But back on the map. In 32 municipalities between 90 and 99 percent of people identified themselves as Bulgarians and in 70 between 80 and 90%. Most are in West Bulgaria and North Central Bulgaria, some of the municipalities in the regions of Stara Zagora and Yambol. Generally seen (the map with%), how from Ruse diagonally by the west and south and in the Black Sea coast are large Bulgarian communities. And less than 10% Bulgarians in 6 municipalities – Eastern Rhodope Mountains and about Shumen. Internal (urban) migration and movement of borders in the Balkan wars define modern look – concentrating in large cities or remain between the border and one of the largest cities to which refugees from the early 20th century are headed. About the last is best seen in the area of middle Maritsa and Tundzha.
Bulgarians in Serbia 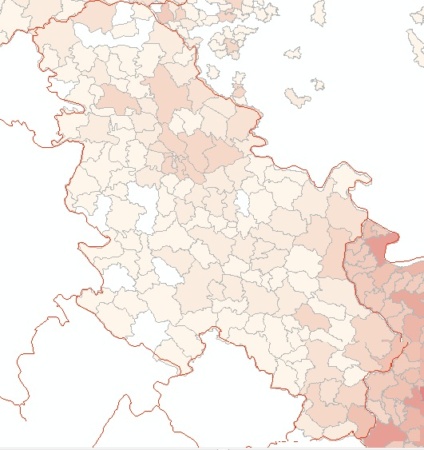 When it comes to the Bulgarians in Serbia, most often it is associated with Western Outlands, where cemented largest Bulgarian community. And if a 60s, 70s of the 20th century, Dimitrovgrad and Bosilegrad have followed the current vision of the Western and Central Bulgaria with about 90% of the Bulgarian population, now and in the two cities percent fell to nearly 50. But this has led to an increase of Bulgarians in depth in the nearby cities of Nis, Pirot, Leskovac and Vranje. Still percentage, this increase is not reflected as cities are big enough. North along the Morava and Timok, there is no distinct and palpable Bulgarian ethnicity, although in the 30s of the 20th century more than 15 000 have said they do not speak Serbian, but what they have spoken – the archives are silent.
Another large Bulgarian community is in and around this city of Belgrade, but it is rather a product of internal migration and urbanization in Yugoslavia in the second half of the 20th century, and a new Bulgarian immigration. But in the two-millionth city 1-2000 Bulgarians can not reflect the ethnic composition of the city. Due to internal migration, we can find Bulgarians in almost every Serbian municipality. But it comes to units or at most dozens, making them equivalent to 0.1% at the most …
Small (1,500 people), but traditional and tangible is the community of Bulgarians in Vojvodina. Away from the Bulgarian border, they are part of Banat Bulgarians, there are 4-5 larger outbreaks preserved language and traditions.
Bulgarians in Hungary

In Hungary live and identify themselves as Bulgarians about 6,000 people, half live in Budapest and Pest Province. On the border with Serbia and Romania there is no large communities, most Bulgarians are in and around the city Segedin, but not more than 0.05% of the population. Interestingly increase of Bulgarians in municipalities near the Slovak border, considering that in Slovakia Bulgarians included as part of the ethnic composition of the country. But there talking about no more than tens in area, why not present in this map.
Bulgarians in Romania
Nest of Bulgarian emigration till Liberation definitely seems devoid of Bulgarian presence. In 20 millions Romania live just over 7,000 Bulgarians. Although Dobrudzha always been disputes between the two countries today in the North Dobrogea living individuals Bulgarians, even in big cities. Even exile Braila, where for less than 150 years there were over 20 000 Bulgarians, they are now only 12. But at the heart of the country, to the old capital Targoviste has Bulgarian community of over 1500 people. More than half are in the municipality Baleni, 20 km from Targoviste, which they are 10% of the population. The municipality has two villages – Baleni-Romani and Baleni-Serbi, but how are distributed Bulgarians there I can’t find data.
But the biggest Bulgarian community is located in the westernmost end of Romania near the town Timisoara. These are Romanian Banat Bulgarians, numbering 4500 people and in some municipalities there are between 5 and 45%.
Bulgarians in Moldova 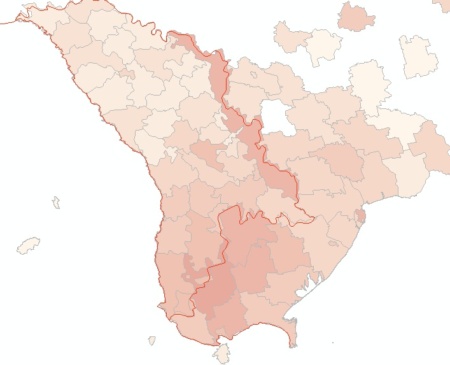 And now some of the countries in which missing data and information on Bulgarian ethnicity.
Bulgarians in Macedonia
Officially, today only 1500 people in Macedonia are defined as ethnic Bulgarians. Regardless of my and many Bulgarians view, I want to use official data and not imputing consciousness of someone who does not want it. As much as we talk about manipulation in the census in Macedonia, column “Bulgarian” has always been present there. And claiming to be Bulgarians numbers last 70 years has always ranged around 1,000 + – several hundred. As close (as I and many other Bulgarians have a ancestry by there) ethnicity, I would be include a separate column, I guess will be interesting graphics.
Bulgarians in Greece
Here again we enter in dilemma created by ethnicity of the Pomaks, who are a big part of the “non-Greek” population south of the Bulgarian border. But Greek census missing column about ethnicity, and can not be filtered only Bulgarians whether Christian or Muslim. Data about Bulgarians can be found in Greek statistics only for new economic immigration and this data will find a place in next file for Bulgarian diaspora.
Gorians, Chuvash, Gagauz, etc.
As with Macedonians those related to ethnic Bulgarians can find a place here, but as a separate ethnicity, , since they themselves identify as such. I am no longer 20 years old to be fascinated by the history of Magna Bulgara or must define every nation, ethnicity, or name containing syllables ba-, bo-, bu- on count to feel proud of my origin.
Yet there is much more to add to the map, but what – I’m open to suggestions.

Next article Colors, sounds and mummers or Surva in Pernik